This ride of about 30km was the last segment in a 250km bikepacking route I have been planning on the island of Zealand in Denmark. The route is made up of three local bike routes which have been connected with farm tracks, forest roads and minor roads. 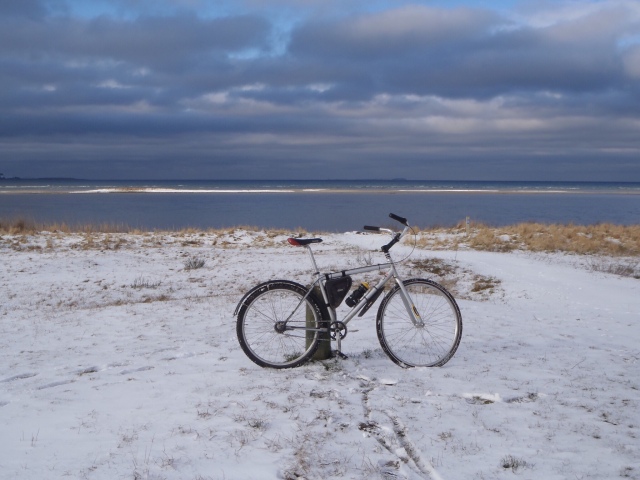 So this 30km was a bit in the middle that I hadn’t managed to ride yet but today would alter that.

During Saturday night it had snowed a little, three to five centimeters. The appearance of the countryside had changed considerably. Gone were the drab browns and greens, replaced instead with a light dusting of bright white. Much more pleasing to the eye. 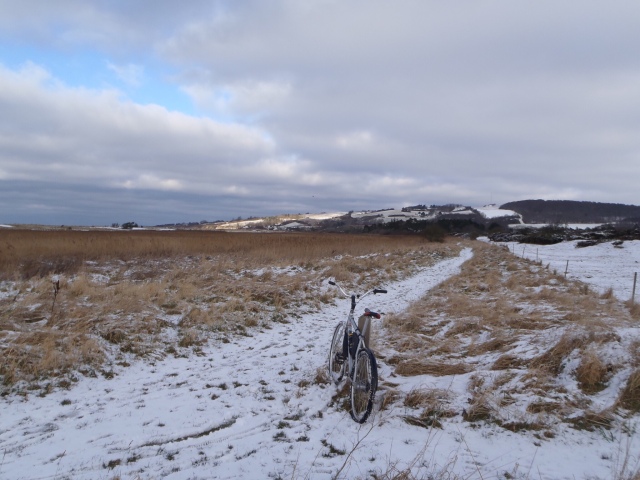 Today’s route started in the dunes at the Sanddobber campsite, following the beach for a couple of kilometers before running out onto the asphalt road. Once on the asphalt the road began to rise into the Veddinge Hills. After a short distance it was onto gravel and snow again. This stretch of roughly 3km was quite challenging due to several reasons, a very steep ascent slippery with snow, the bike only having three gears and the fact that I´m not as fit as I used to be. So it was off the bike and push. No problem, I got my feet warmed up again. At the top I discovered it was just as steep on the other side. Despite coming down the hill sideways I managed to stay on the bike. Steep descents are always a problem with only a rear brake. 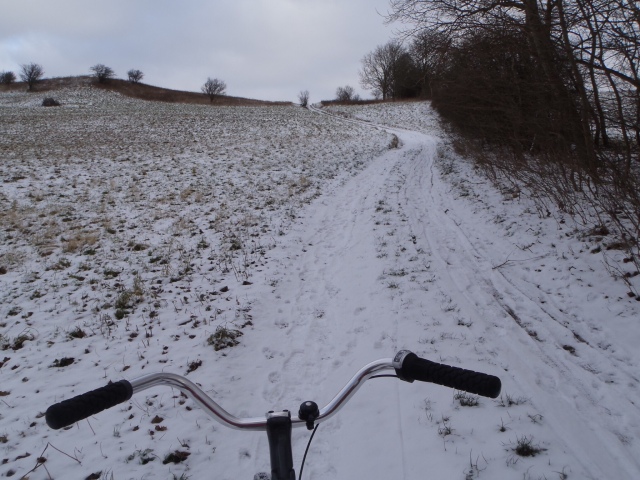 Again a short stretch of asphalt before turning onto more gravel and snow. Another steep ascent and more walking but plenty of time to enjoy the marvelous winter scenery. Just over the brow of the hill are what must be Denmark’s best placed shelters. The wooded area in front of the three shelters has been cleared, giving a panoramic view over the Sejerø Bay to Kalundborg 20km away. This was the perfect lunch spot, sitting in a shelter and enjoying the view. A long sweeping but slow descent through the woods gave an easy start after lunch. Slow because the main track is crossed several times by an MTB track, so better safe than sorry.

Out of the woods and onto asphalt once again. Unfortunately there are no farm tracks or forest roads available for cyclists so it was asphalt for the next 7km.

After hitting asphalt the route took me through the villages of Kårup, Ordrup and Veddinge. All ghost towns. No traffic, no open shops, no open cafe´s or retaurants, closed houses and no people. During the winter months all these villages have a dreary run down look about them. Think `Paris, Texas´ without the sun. Gives ok cycling now but is hell during the summer months. The reason being that this is a huge summer house area which of course is sparsely populated during the autumn and winter months but flooded with people during the spring and summer months. Even after living in Denmark for 40 years I still can´t get used to these ghost towns up and down the Danish coastline.

After climbing up and down the Veddinge Hills I arrived in the village of Høve, one of the highest points of the area, an incredible 47 meters over sea level. The views are amazing, at least 30km in all directions. Høve is quite a tourist center with a newly built café, which was closed, youth hostel and one of the areas main hiking routes passing nearby. From here I cycled to the town of Asnæs, a small town but at least with shops that were open. Here I would finally leave the asphalt and cycle along one of the numerous canal tracks in the area.

After leaving the Veddinge Hills the route entered an area called Lammefjord. This is a large area that lies 3 to 4 meters under sea level and is famous throughout Denmark and Europe for vegetable growing. Mainly asparagus, carrots and potatoes. Unfortunately there´s been so much rain during the harvest season this year that harvesting machines haven’t been able to get into the fields or if they did they got stuck in the mud. Big isn’t always better. 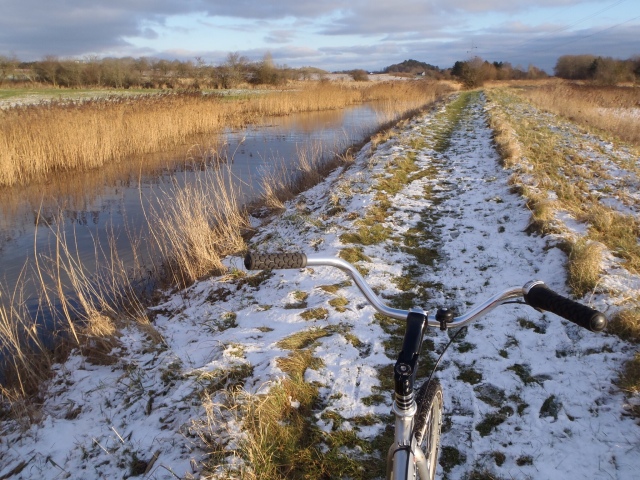 The Lammefjord canals are drainage canals that have never been used for transport. Every couple of years the canals are cleared for silt and any other debris or plants so there are tracks running along the canals albeit very rutted and uneven but no well maintained towpaths. On some shorter canal stretches there are cycle routes but not on this particular stretch. However the ground was frozen so the going was reasonably easy. The deep ruts filled with water were also frozen so it was just a matter of keeping going. The last stretch along the canal to Grevinge-Lammefjord was easy going with only swans, coots and the occasional buzzard for company. 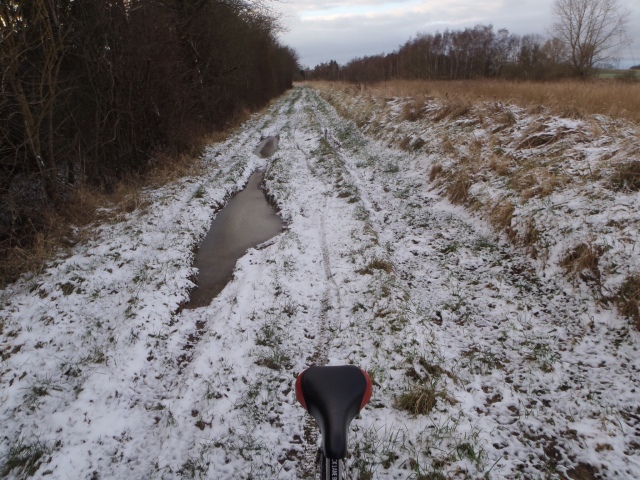 After 30km in the cold it was a pleasure to reach home have a hot bath followed by tea and cake. A fantastic end to a fantastic days cycling…