Day 2 – A ride around Kielder water.

Day two, and a snotty headachy start to the day… this doesn’t bode well! 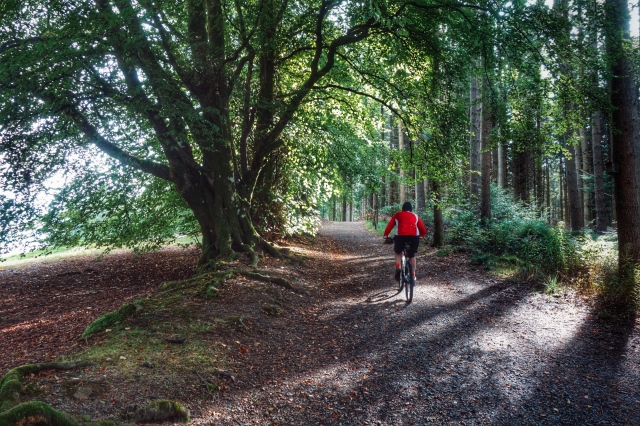 With both of us feeling yesterdays climbing in our legs we opted for an easier day, a full fried breakfast, lots of coffee and faux faffing (faux faffing, means finding things to faff with thereby delaying the start of the ride as long as possible) meant a later start, we’d decided the previous night to ride around the reservoir again, this time in reverse and actually stopping to explore the art works. 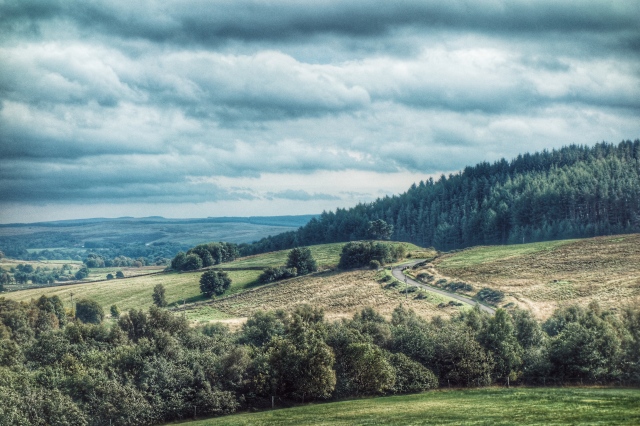 This time we headed out in the opposite direction to yesterday, riding east towards the dam, already it seems like someone has added more hills into the trails !. Being a Saturday there are more people about today, lots of dog walkers and cyclists but very little activity on the numerous boats anchored off shore. 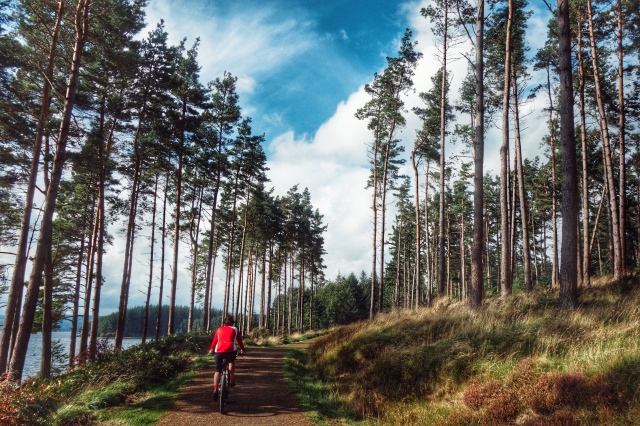 First stop is at the red squirrel hide, and bingo, we open the door to be greeted by a rather large male red squirrel stealing food from the bird feeders, he obviously sees us enter the hide and tries to hide behind the pole holding the bird feeder upright, not very effective when you have a big bushy red tail. After a few minutes he realises that we are no threat and continues about his business, happily stockpiling food for the coming winter, meanwhile there seem be literally hundreds of birds coming and going, chaffinch, gold finch, green finch, nut hatch, blue tits, coal tits, and a lone woodpecker amongst the crowd.

Eventually pulling ourselves away we head off down the lakeside trail, passing a tandem couple who were piloting for blind stokers, obviously enjoying their day.

The trails were being worked on in various places, getting ready for the upcoming Kielder Marathon, sadly famous for a recent winner being caught cheating and taking the bus on his way to victory, or so he thought.

Onwards now towards the dam head, lots of discussion about the whys and wherefores of the dam construction, we (being neither civil engineers or ever having anything to do with big  earth moving construction) wouldn’t have done it like that, obviously, but still its a super impressive feat of engineering despite being widely and locally thought of as folly.

Across the dam and now heading west we pass a marines reserve camp, they are getting ready for a RIB ride, presumably for an exercise, and then we are heading up again, more cyclists passing us again coming the other way, fewer walkers now in this remote part of the reservoir, at this point it dawns on me that the art works we’ve been exploring would easily double up as a shelter from the weather, I’m guessing that this isn’t a coincidence.

The art works are intriguing, mostly linked to local issues/concerns/cultures, the artists have been given free reign to express themselves knowing that in reality very few folk (in comparison to them being in a gallery) will ever see them given the effort involved in getting to see them, bikes of course being the perfect vehicle to gain access. 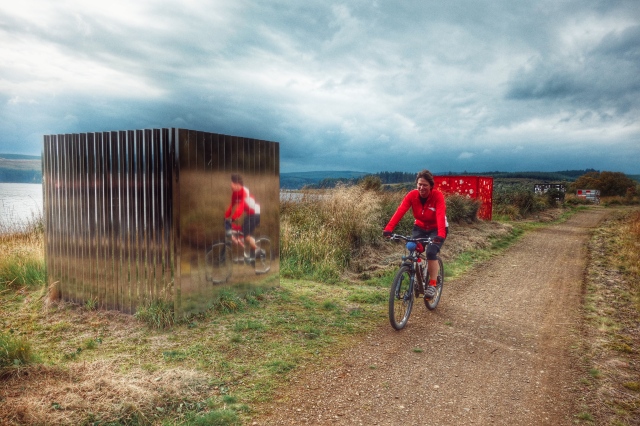 Of course not all of the art works are large scale and immediately obvious, some of my favourites were the small copper and brass plaques that had been inserted into rocks and left along the trail, easy to miss but enchanting when seen. 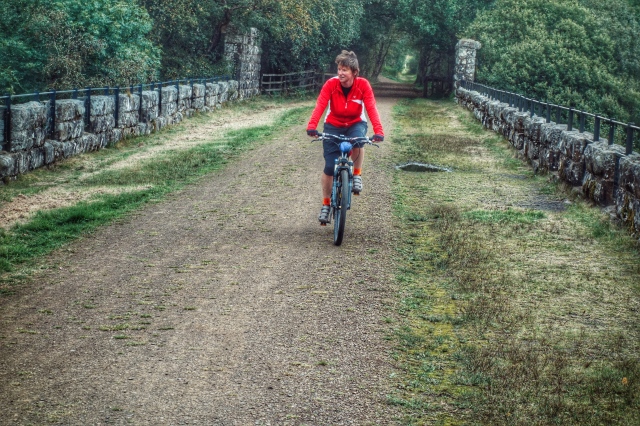 My personal favourite is the chambered cairn by Chris Drury, partly because to access it you have to ride a half mile of cheeky single track trail, partly because of its rounded and feminine shape, but mostly because it is also a camera obscura. Follow the instructions and step inside, shut the door and let your eyes adjust to the darkness, as you settle you start to see the light reflected by the waves from the lake on the stone floor, the longer you linger the stronger the apparition becomes, totally mesmerising. 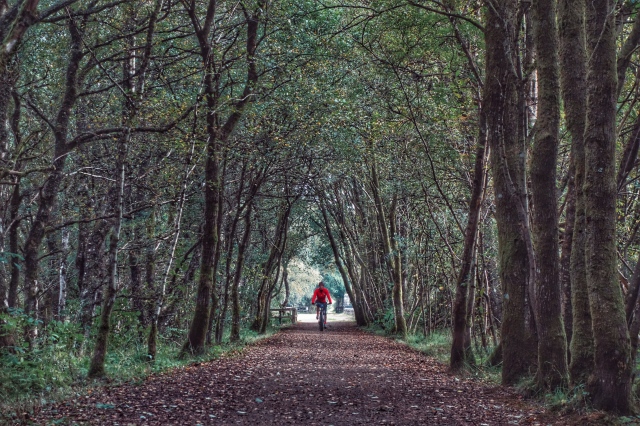 Out and blinking into the sunlight, heading back to the main trail, there are signs here that people have bivvied out, charred stone circles of extinguished fires, but thoughtfully nothing more, carry it in, carry it out. 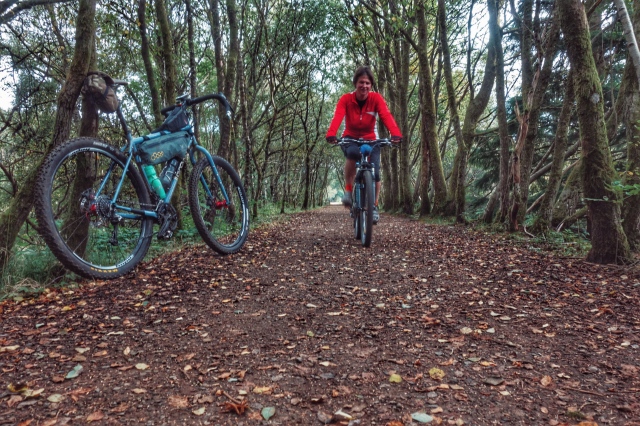 Moving on now fuelled by thirst and hunger we stomp up the hills towards the next installation, stop to read the information board and suddenly we are surrounded by midges, this is a shock as so far its been either too cold or too windy for them to appear, the hide like structure is protecting from the wind so effectively that the midge can flourish here, it’ll not surprise you to know we didn’t hang about.

Climbing yet another hill around a little cove and we see movement in the reeds, its the marines covered in camo and ammo, doing their thing, I don’t think they were too impressed by Saras shout of ‘we can see you’.

By now we were almost back to the castle, corned beef pie and peas foremost in our minds, however we got distracted by the fabulous viaduct structure, restored and with added wrought iron art works we ride slowly across, stopping to take photographs and try and work out where the road as pictured on the info board was, and then we were across it and heading back towards the car.

By now there was more life on the lake, windsurfers, kayakers and boats all in motion, even the ferry was running back and to across the water, and we needed food, back to the car to find that despite the fact that four of the kitchen staff were sat watching television the food had finished an hour ago and wasn’t starting for another forty five minutes, but we can sell you beer and crisps, only in Britain!

So beer and crisps and nuts were bought, and we sat and enjoyed our second day in Northumbria, amazing and endless landscapes, fantastic trails, quiet roads, amazing artworks and fantastic people, its fair to say that we will be back for more soon.