Adventure in the Outer Hebrides.

My dark cloud came in the form of permanent atrial fibrillation, a debilitating heart problem, which leaves you with not much in the tank where exercise is concerned.
My silver lining was my wife, and her agreeing to join me on a gentle cycle tour in the Outer Hebrides. Up to this point her cycling had been done with the kids whilst on holidays, and a few steady pub rides with me.

A date was set, bikes serviced, panniers filled and off we went. 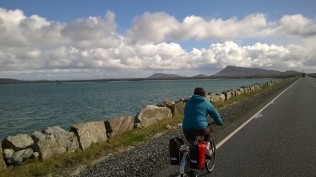 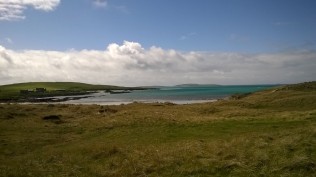 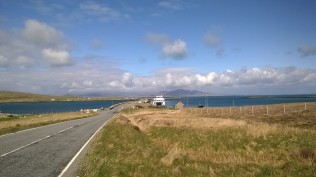 The ferry from Oban to Lochboisdale was a bit of an ordeal, but we landed safely, in the dark however, so not much to see. Waking up the following morning things were different and as we set off riding we were treated to some cracking views.
I had expected the Uists and Benbecula/Bernaray to be hilly and hard work. They proved otherwise, my wife loved spinning along at 20mph with a strong breeze on our backs.

After two fantastic days on Uist, it was time to move on to our next destination.
Harris, and hopefully Lewis, time dependent.

We had been warned on the ferry, by a group of fellow cyclists, that the Golden Road on the east side of Harris was to be avoided. On leaving the ferry, we turned right. In for a penny…. 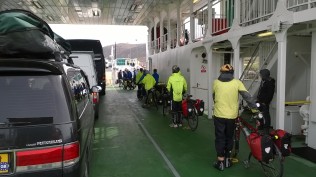 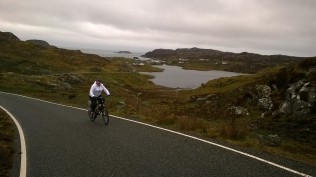 The next 19 miles proved to be one of the best bits of road I have ever ridden. Hardly any traffic, a proper roller-coaster of a road, dropping to sea level and climbing back up to your start height. Passing through lovely little groups of weather washed houses in coves by the sea. It is very, very hilly, but not one to be missed. The biggest hill on the ‘Golden Road’ brings you out at a junction, where the longest descent begins down into Tarbert, our place of rest for the following 2 days.
We spent the following day riding in torrential rain, taking in the west side of Harris on the road we decided to avoid. We had made the best choice, the Golden Road is far more spectacular and rewarding.

We ran out of time on Harris, we’ll have to save Lewis for another trip.
Next stop was Skye (Mordor in our minds!) 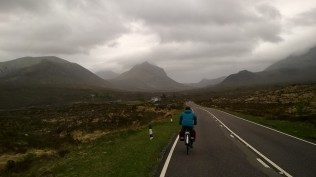 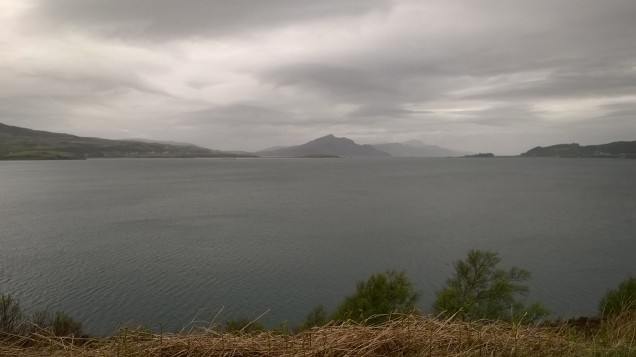 A short ferry trip from Tarbert to Uig saw us on the bikes early, but also in a torrential downpour. Low cloud and mist did it’s best to spoil the views, but after a steady climb the clouds lifted to give us some cracking views of the Cuillins, which looked like the dark lands in Tolkiens novel. The rain started again on the road towards Dunvegan, so we made u-turn and headed towards Portree and hopefully a nice warm pub.

The following morning the doom had lifted a bit, so we set off, first visiting a well know climbing/hiking bolthole, with an amazing collection of malts. We then rode around a lovely headland, with views of the Cuillins on one side and the island of Scalpay to the other. A plan was hatched to return to Skye for a week with mountain bikes and a lot more exploring in mind. We spent the night in Broadford, but in order to catch our early ferry a time trial formation saw us reach Armadale with plenty of time for a coffee.
Skye had been nice, but needs more time to explore.

Morar, Moidart and Ardnamurchan were next on our route. 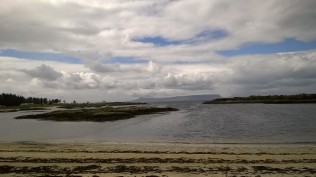 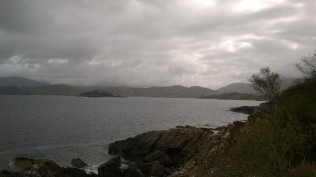 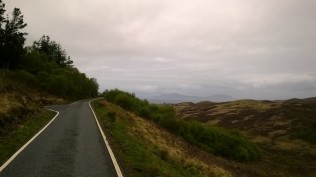 Once again we had been warned to stay away from the main A-830 road, which we manged to do for most of the way. A bite to eat in Mallaig was followed by a glorious afternoons ride following the Morar coastline when possible. The tiny roads from Morar to Arisaig were simply stunning. Quirkily built houses, white beaches and stunning campsites dotted the whole route, the road climbing up and down the whole way…..a perfect cycling road.
Even my companion agreed with this, she has now decided that she likes hilly routes rather than flat ones, her point being that you get a rest on the hilly route.

We made it to our bed for the night at Lochailort, chased by a thunderstorm for the last few miles. Good beer and food followed, and an early night, we were feeling shattered.
The destination for the next night was to be Acharacle and I can honestly say that the route down the coast of Loch Sunart has got to be one of the best in the whole of the UK. A gem and another roller-coaster of a route, with a cracking cafe at the nature center at Glenborrodale. A huge climb follows, but is then rewarded with a 7 mile downhill freewheel to Kilchoan for the ferry to Mull. 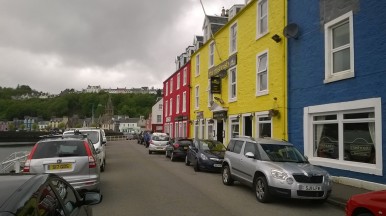 The ferry journey into Tobermory was brilliant, porpoises and seals joined us. What a shame to be let down on leaving the ferry. The multi coloured houses made it seem a bit tacky. We checked into the hostel, which is also a bit grim, and to top it all, the world famous Mishnish pub had no hand pulled ale to sell.

Good job we were only booked in for the night! It was at about this time that my new long distance cycling companion decided that she had loved the trip to bits, but was totally knackered. She had done herself proud on the whole trip. Steady away uphill, steady away downhill, but smiling the whole trip. We had wind, we had rain and we even had some sun. Some areas will be visited again in years to come.

The Outer Hebrides is well worth the effort………one of the best cycle touring areas in the UK.

I’m just glad I found my silver lining to share it with.

2 thoughts on “A silver lining…”