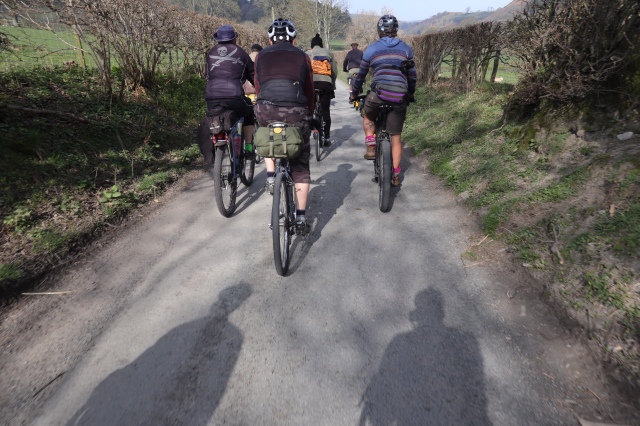 Imagine, its the end of March in 1919, its snowing heavily, its bitterly cold, you can either stay in a cosy pub with a roaring fire and order another pint, or you can choose to ride your 1919 style bicycle up and over that big hill in the waist deep snow, oh and please bear in mind that this is taking place less than a year after you’ve been home from serving (voluntarily) in the first world war, what would you do ?

Fast forward one hundred years and here we are in that same pub to celebrate that decision to go out into the snow. Regardless of the locals advising to stay, a small number of them chose to go out and do it. The Wayfarer as he became known was amongst them and it was he who wrote about their adventure, that documentation the reason for this centenary celebration. 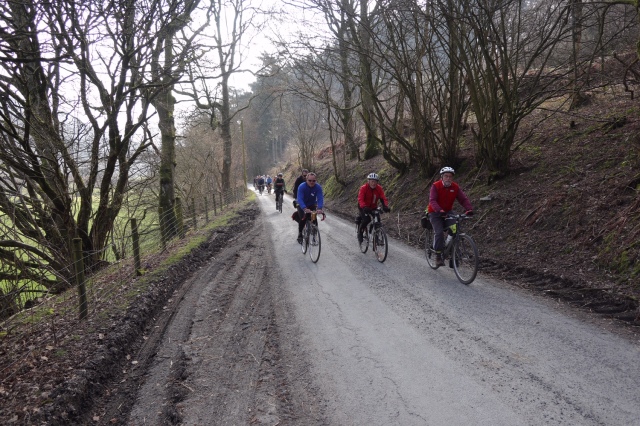 There’s a large number of fellow cyclists flocking around, some dressed in the attire of 1919, some even riding bikes from that period, there’s a buzz in the air that something special is upon us, its exciting. 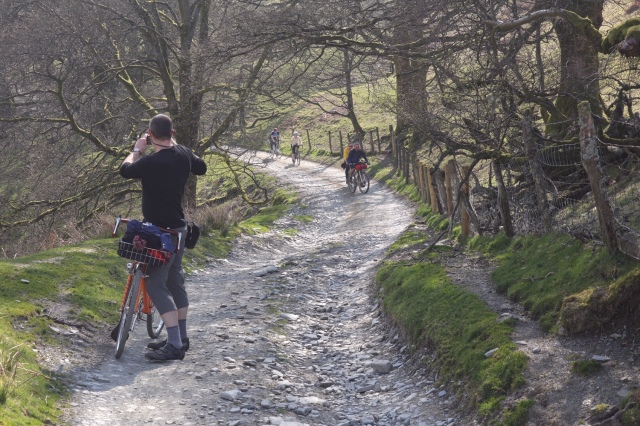 Paul and I had set off the day before, we wanted to ride to the event, it seemed appropriate to do so, so we did, it was a grand day out on the bikes and easily the longest ride either of us had done this year. An early start saw us picking up a bacon butty for breakfast and then we were into it, familiar lanes and tracks flying by, helped no doubt by having a slight tail wind, heading west we got to Kelsall well ahead of our (rough) plan so coffee and cake was taken. 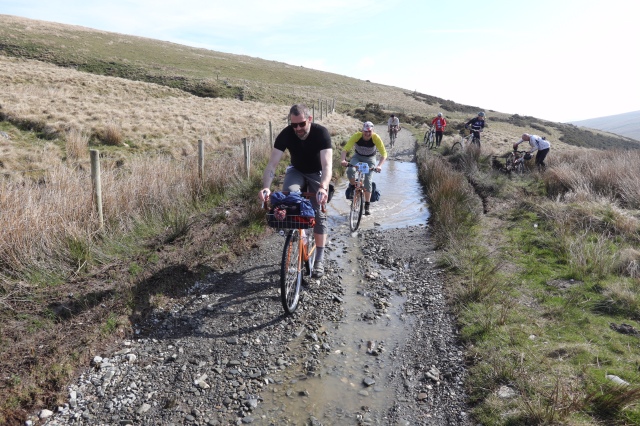 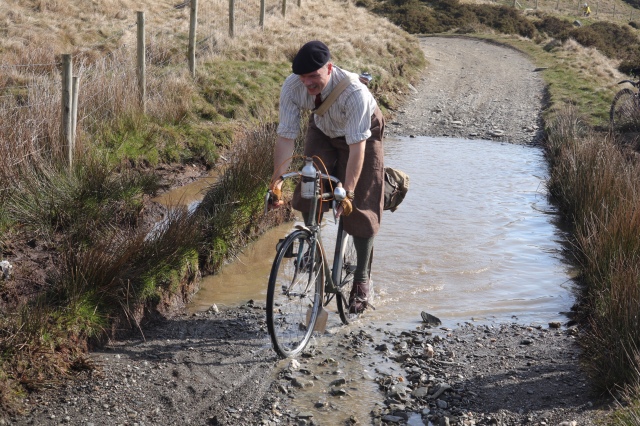 Soon enough we were over the border and into Wales, now this was less familiar territory for us, and of course this was the point where we started to need the Garmin to help guide us through, needless to say it was at this point that the damn thing stopped communicating !

We carried on regardless, half making it up and following our instincts, half deciphering what the Garmin was trying to tell us, it was actually going ok (and we had the pleasure of riding a lovely track behind Erdigg Castle, one to note for future reference) until we most needed the damn thing and we missed a vital turn which dumped us onto the A5 and heading into Llangollen. 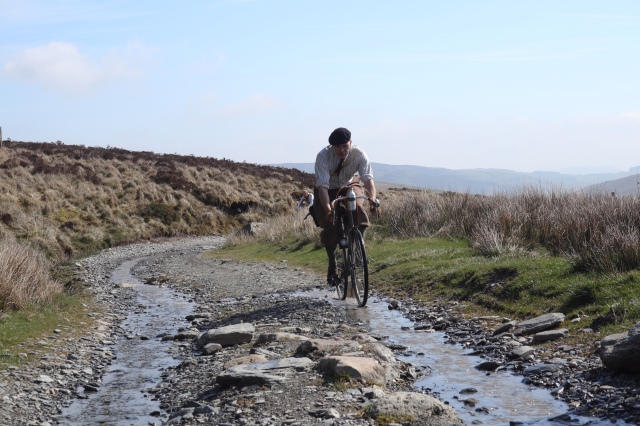 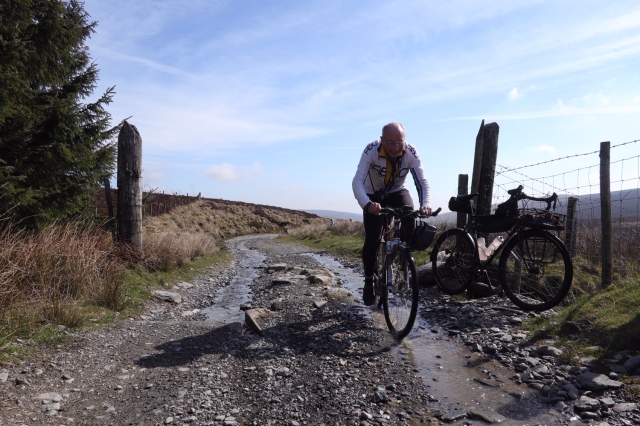 A moment of weakness allowed itself to rise and we sent Neil a message asking if he could come and pick us up in the van, fortunately/unfortunately the message wasn’t delivered and we had no choice other than to go up the appropriately named hill street, it should be called hell street in my opinion because that’s what it felt like pushing a loaded bike up a one in four grade single track lane that’s very obviously a rat run for the locals in four by fours.

As always though we eventually reached the top and were granted a view to die for, there was some discussion about how we could have ridden up here when we were younger and fitter…… 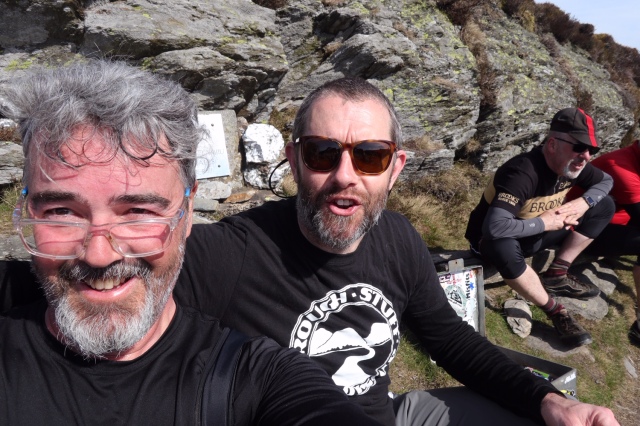 Carrying on over the top and by now we were enjoying the well earned descent, soon enough meeting up with Neil, he had ridden out to meet us as per the plan, and then as we neared Llanarmon it was quite a relief to be freewheeling. 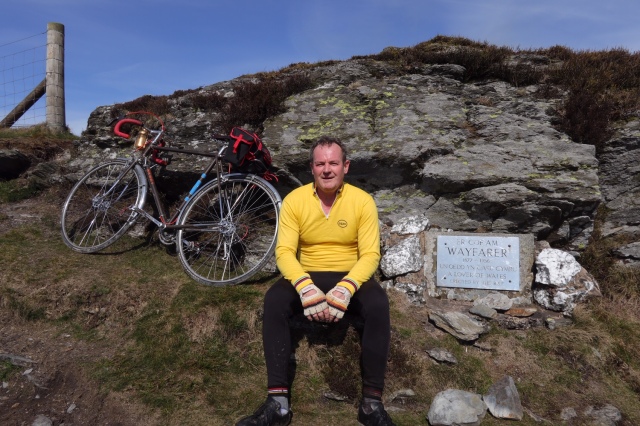 The lovely folks at the West Arms welcomed us in, once showered and changed we had a pint in hand and were ready to join the celebrations, dinner quickly followed and then we were treated to a fantastic slide show of photographs from the rough stuff archive given by our friend Mark Hudson (current Rough Stuff Fellowship archivist) and one of the team (working alongside Max Leonard) who are working incredibly hard to decipher/digitise/edit and then produce the forthcoming book of these amazing photographs.

This was part one of the history lesson, a broad view of just what Rough Stuff Fellowship actually means (and continues to do so) in relation to the rest of the cycling world and its past, how it influenced generations of young people to get outside and into the hills and  how amazing that as well as this there was amongst them a number of people who were determined to document these activities, we were sat savouring their efforts and grateful to them for doing so.

Of course this wasn’t just it, a major part of these gatherings is the social side, like minded souls meeting and sharing their cycling passion, catching up with old friends, meeting new friends and the relatively new phenomenon of meeting people that you feel great kinship with, know something about each other, have shared stories and photographs with….. the social media friends, names and faces that have previously only been seen via a small screen, not all of them are weirdos or axe murderers, that was quite a relief ! 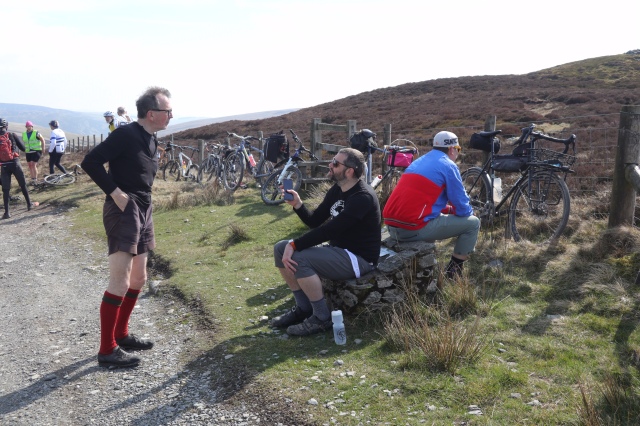 Saturday dawned, breakfast was had, stories of freezing temperatures from the campers, more people arriving, more bicycle exotica arriving, lots of photographs taken and then suddenly we were off. A leisurely pace at the back of the pack was fine by me, spinning along and chatting with folks of all ages, soon enough we were at the start of the fabled pass, the sense of history partly obscured by the blinding sun and brilliant blue skies, although I didn’t hear anyone complaining about this. 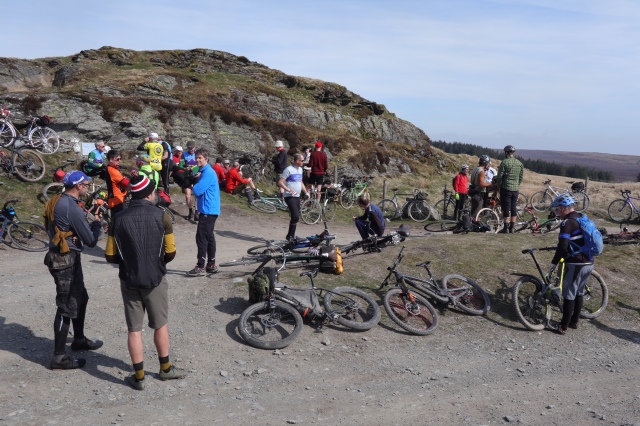 The steepness and roughness of the track soon had people off and pushing, it wasn’t particularly hard or difficult but given that the conditions we encountered could be fairly described as ‘as good as its ever going to get’ it again made me consider what I’d have chosen given the conditions back in 1919. 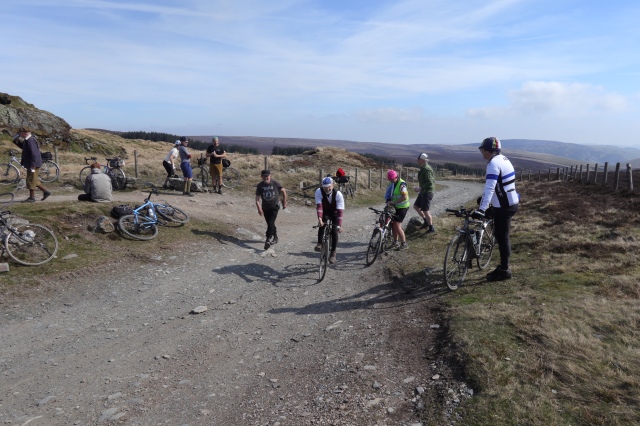 Lots of banter along the way, lots of stops for photographs, especially of those brave enough to ride through the deep puddles, nearing the top I could see Neil offering a bag of donuts as an incentive to sprint, I think Stefano just beat me there !

So we sat, and chatted, and soaked up the sun, and took selfies just like tourists, there was some discussion about how we’d normally be chuckling at tourists taking selfies at a famous landmark but somehow because we’d earned this it was okay, such is the lore of the Wayfarer.

Paul, Neil and I were content to sit and soak up the atmosphere around the memorial, watching the veterans bicycle club members arrive, astonishing stuff given that some of the lads were as old as their bikes, a real inspiration to see.

We had no desire to do anything now other than savour the descent, and although we weren’t on period bikes it was an exciting few minutes riding down that trail on what could be called ‘under biked’ bikes, yes a full suspension mountain bike is the appropriate tool for the job but we were feeling quite smug about our efforts.

That was of course until it dawned on us that the veterans would also be coming back down the sane track on bikes with rod brakes and narrow old tyres, a big dose of humbled pie for table number six please….

Saturday night was the main event, David Birchall of the Anfield Bicycle Club delivered the full story of the Wayfarer, the history leading to that famous ride, the story of the ride and subsequent stories afterwards, all fascinating and interesting, the old saying about knowing where you’ve come from helps to know where you are going is very apt here. 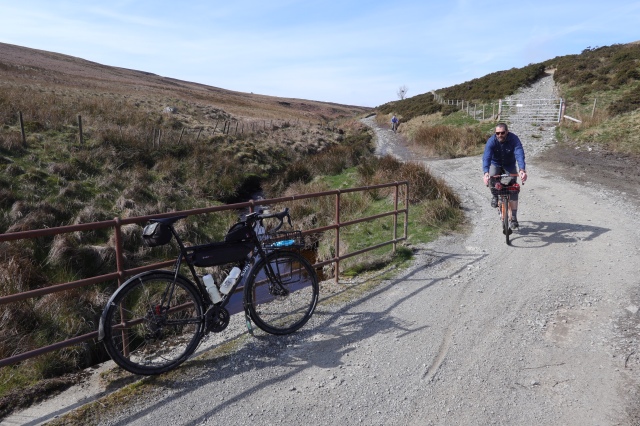 The dinner was a roaring success, very informal and another chance to make new friends over good food and beer, its always a winning combination, stories were told, arrangements to meet for rides were made, and finally at half past three we went to bed.

Sunday morning was a subdued blurry eyed affair, coffee in copious amounts consumed and then for us it was all over, trains were waited upon, the hustle and bustle of the city was ruffling our feathers after the tranquility of that beautiful welsh valley. The train ride allowed some time for reflection, there was a vague memory of making the gathering a regular event, something we would love to support, there’s also a great desire to get back out there amongst those hills, it’d be nice to do that before the clocks have ticked over another century.

And so, after the weekends history lessons and the amazing experience of riding the track in its best condition would I have gone out there in that snow ?

The 57 year old me is fairly certain that I’d have stayed in the pub, the 25 year old me would have gone out in it…… whatever happened to him ?

7 thoughts on “Riding to a history lesson, the Wayfarer Centenary Weekend celebration…”