It’s hard to believe it’s almost 2 years since Steve, Will and I headed over to Anglesey for our, now legendary, late Summer overnighter (see post – Holy Grail)

A trip that will forever be remembered for many standout moments, chief amongst them being that it was the inspiration for the name of this humble club of ours! Anglesey is an absolute treasure for cyclists… Stunning scenery, barely any traffic, and an abundance of our drug of choice (of course!) grass up the middle.

It was a bit of a breakthrough for me on this particular Monday. I very rarely allow myself to be selfish and disappear off for a full day of riding (family responsibilities usually win) but not this time! When Steve suggested a day trip as a change to the usual local riding I couldn’t say no, my first trip to the Island was so wonderful I jumped at the chance to go back and with the weather continuing to delight, the deal was sealed.

With a prompt 6am pickup from Steve, we were on our way. It seemed fitting that we would head back to the start point of our original trip… The wonderful, sleepy Camaes Bay.

“Known long ago as Porth Wygyr, Camaes was one of the busiest ports in medieval Wales. Today it is a peaceful harbour, but at one time it was a bustling industrial port exporting china clay, bricks and ochre and importing everything a rural community needed but could not supply itself.

After the ‘traditional’ on the road McDonald’s for breakfast, we pulled into the car park not long after 8. With the whole day ahead of us we took our time unloading the bikes and leisurely conducted all safety/kit checks (faffage) before setting off on our mini adventure. 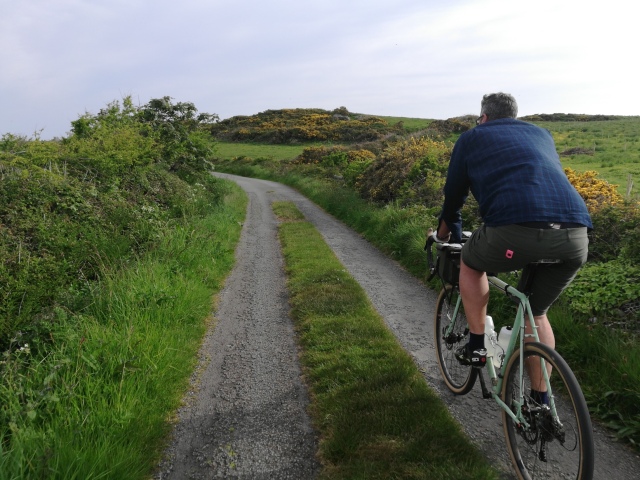 As soon as we turned off the main road and onto the quiet back roads (that would be our playground for most of the day) I was smiling. Anglesey is sooooo peaceful, add in the smell of the sea, the sense of space that the scenery provides, and the effect on the soul is immediate. 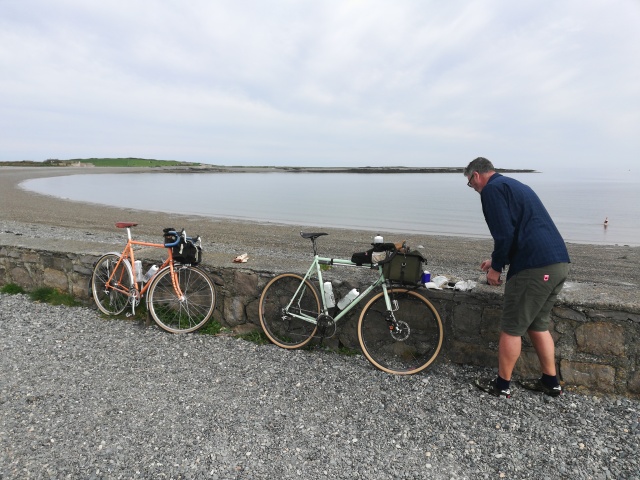 Steve ‘drummed up’ whilst I continued my slow wake up. Morning wishes were exchanged with the few other people around, the odd dog walker and a very brave young lady who’d just been out for an early morning swim! Brrrr

After a nice cup of tea we set sail proper, the road that leads out of Cemlyn Bay is perhaps the finest of them all. 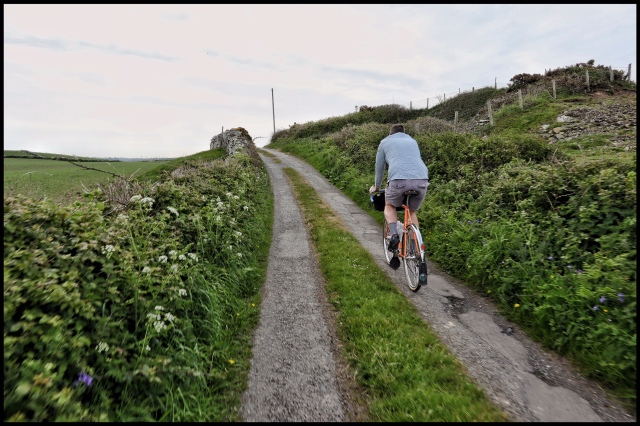 On an island with so many stunning lanes to choose from it’s a bold statement I’ll admit, but it is a magical stretch of #grassupthemiddle.

There is literally miles of the stuff!!! 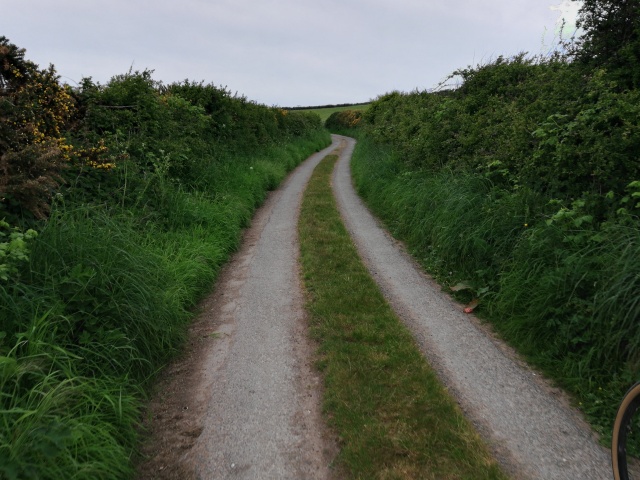 There was no real plan as far as route was concerned, one of the reasons I like to ride with Steve is that he affords me the role of passenger.

All I have to do is turn up and follow, he knows the Island so well he easily takes the lead and generally makes it up as he goes along. 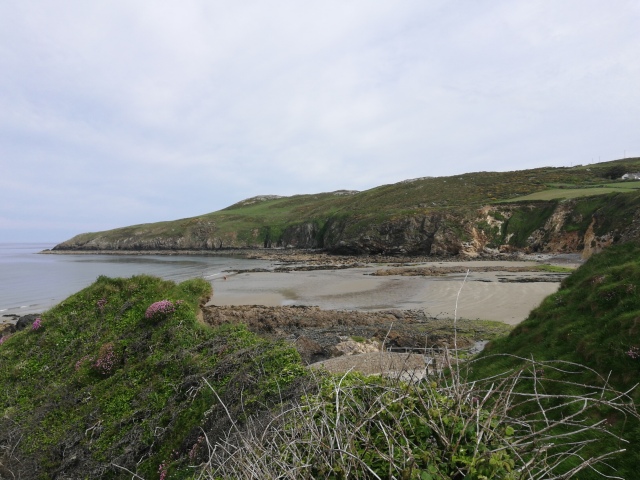 The beautiful Church Bay came into view after winding along the lanes, the Wavecrest Cafe was unfortunately closed, again! (a running joke it would seem) one day I’ll actually get to see inside the place.

Refreshments would have been nice, but the surroundings more than made up for it. 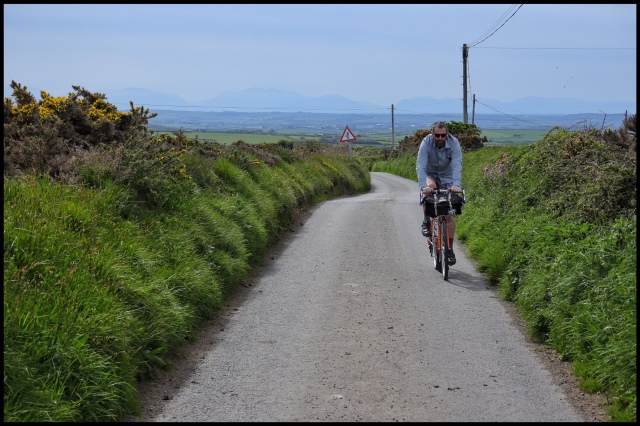 The brief stop allowed for ideas to form and it was decided that the RSPB cafe on South Stack (Holy Island) would be a great spot for late morning coffee & cake.

“South Stack is famous as the location of one of Wales’ most spectacular lighthouses. Until 1828 when an iron suspension bridge was built, the only means of crossing the deep water channel on to the island was in a basket which was suspended on a hemp cable. The suspension bridge was replaced in 1964, but by 1983 the bridge had to be closed to the public, due to safety reasons. A new aluminium bridge was built and the lighthouse was reopened for public visits in 1997. Thousands of people flock to the lighthouse every year.”

“There are over 390 stone steps down to the footbridge, and 10 metal steps (and not, as local legend suggests, 365), and the descent and ascent provide an opportunity to see some of the 8,000 nesting birds that line the cliffs during the breeding season. The cliffs are part of the RSPB South Stack Cliffs bird reserve, with a visitor centre, and bird hide at Elin’s Tower. The tower provides a place to see Choughs, Peregrine falcon, Kestrel and various marine mammals like the Harbour porpoise seen at high tide, Grey seal, Risso’s dolphin and Bottlenose dolphin.”

We had a fair bit of riding before we’d get there, but we had plenty of time to do it. The lumpy nature of the roads between us and it would require a sensible pace!

Meandering inland for a while we eventually popped back out onto the coastal road. It was absolutely stunning in the sunshine as we reached the rather lovely Trearddur Bay. Critiquing some of the more ostentatious homes along the way, we savoured the gentle roll before the inevitable brute of a climb up to South Stack and refreshment.

With coffee and cake(s) devoured a little touristy business was conducted. A quick soaking up of the atmosphere provided by the Lighthouse and then some ‘Time Team’ action wandering around the Ty Mawr hut circles. 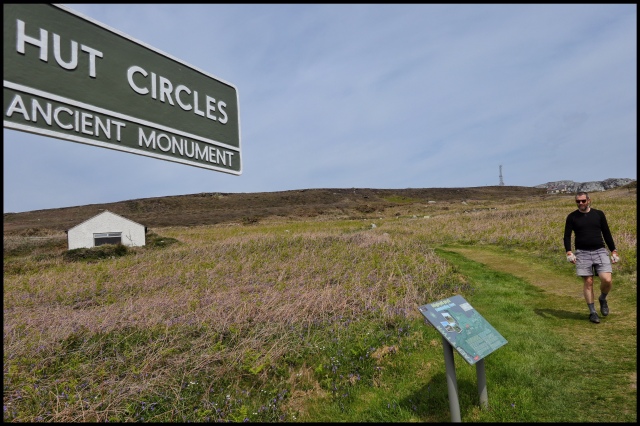 Also known as Cytiau’r Gwyddelod or the Irishmen’s Huts, they are the remains of a group of prehistoric buildings. 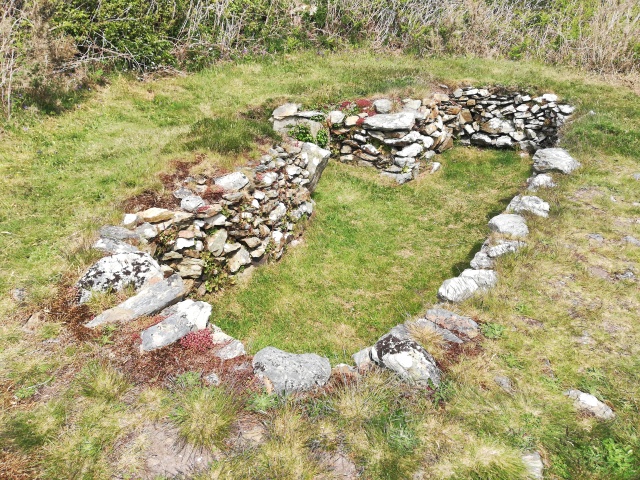 Although the precise age is not clear, much of the site is thought to date from the Iron Age and the settlement may have been in existence over an extended period of time from the Neolithic to the Dark Ages, with different buildings being in use at different times.

We stopped at another site of historical interest whilst discussing lunch options. The Penrhos Feilw Standing Stones. 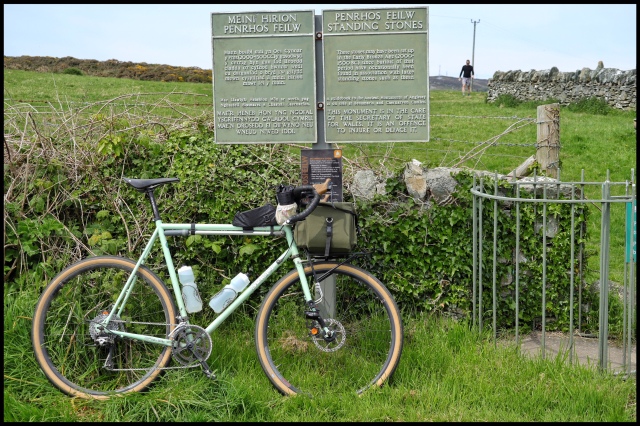 A pair of standing stones thought to date from the Bronze Age, their origins and purpose remain unclear. 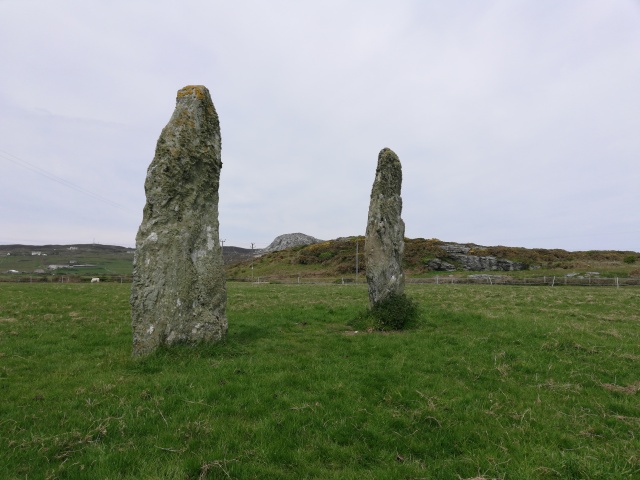 They are about 3 m (10 ft) high and are a similar distance apart. There are theories that they may have formed part of a stone circle or, that there may have been a stone cist between them. Sadly, there is no evidence to support either theory. 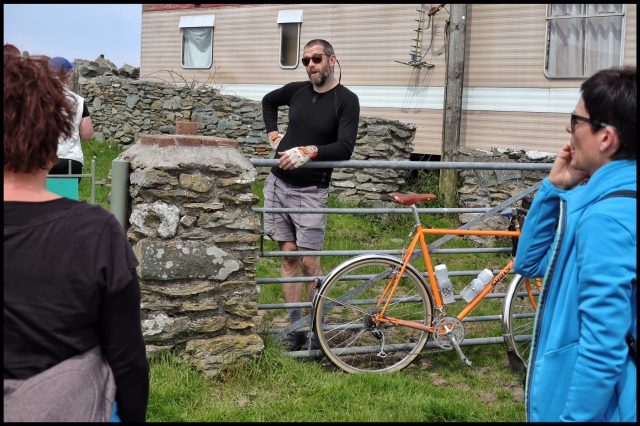 There may be some significance to the fact that they are located just 100 m (328 ft) from the Plas Meilw hut circle but their presence here is quite enigmatic and magical all the same.

Our journey towards lunch took us on a slight urban detour as we skirted underneath Holyhead. Steve’s quick thinking was called upon to navigate us through various small roundabouts, making sure to choose the more promising turnoffs and avoid ending up on the A55! Which, as Steve quite rightly pointed out, would have been “double shit with egg on!!!” 😀

Thankfully we were soon back on quieter roads, whistling through the bluebell woods of Penrhos Coastal Park.

Coffee Cups Cafe at the old Toll House. Run by Carole & Roy (I’m presuming Roy was in the kitchen this day, as we didn’t see him?) it is a fantastic little place, and it came into view with perfect timing. Our bellies were definitely starting to rumble! We received a wonderfully warm welcome, and the experience remained the same throughout. Carole is friendly, attentive and engaging, she made us feel right at home. The Cheese & Mushroom on toast was plentiful, delicious, and at a very reasonable price. All washed down with tea served in fine china, now you can’t argue with that!

After a leisurely lunch and some giggles in the sunshine we said our goodbye’s and got back on the road. Deciding to forgo ice cream with Carole in favour of the cake bar at Church Bay, which we noticed earlier in the day would now be open. 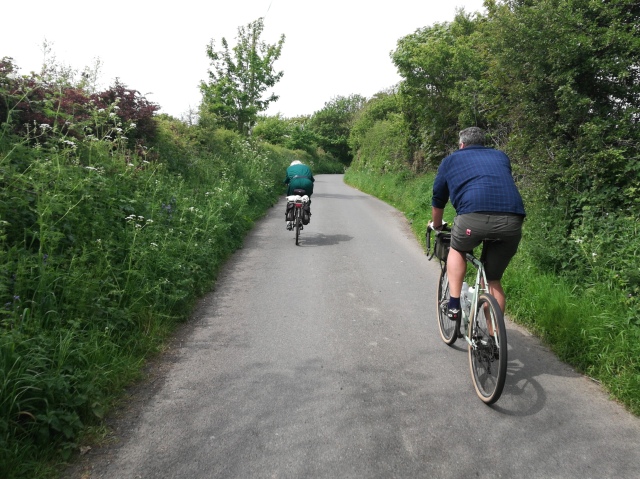 We took our time (as we do) on the way back. Retracing our steps in a roundabout fashion, taking in a couple of lovely old churches along the way. 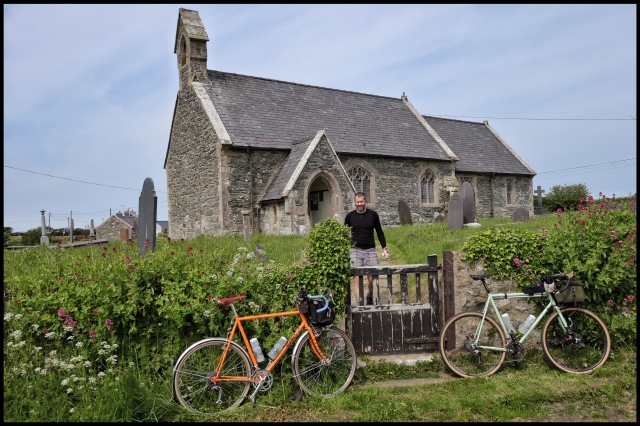 I’m not religious by any stretch, but who doesn’t find such things interesting to nosey at, especially when they are set in such fabulous surroundings?

Whiling away the hours with the usual chat and appreciation of the sights passing us by, we spent a good deal of time marvelling, and geeking out at various (primo) examples of #grassupthemiddle. A little sad I know, but it makes these two big kids very happy 🙂

A brief stop for warm cake and ice cream in Church Bay was followed up with a sit down in the late afternoon sun, back in Cemlyn.

On the opposite side of the bay this time, it was a very peaceful end to a truly wonderful day.

The icing on the cake would have been Fish & Chips at the Harbour in Camaes but, as suspected, the chippy was closed on a Monday! Our trip was made complete however, and was saved by Enoch’s Fish & Chips in the town of Valley just a short drive from Camaes. Open 7 days a week (top marks) I can highly recommend it!

All in all a smashing day trip with a good friend. If you need specific details of the riding you’ll have to ask Steve. What I can tell you is that we covered a good amount of miles, climbed over a good amount of lumps and had a great time doing it.

I can’t wait for next time. Steve has promised a trip to Newborough Forest, which looks fab!