I’m an academic (Leverhulme Early Career Research Fellow) working on antiquarian forgery. As with any academic, work may seem easy, particularly given I don’t have a teaching workload, though it never leaves you alone: there is always the next book and essay/article to write; volume of collected essays to edit; conference paper to propose and/or write; archive to visit to organise/undertake to conduct manuscript research; field trip to organise/undertake. If I had to write a list of everything that I had to do, well, it’d be terrifying. Just press on and lurch from one urgent priority to another without loosing sight of the bigger picture. As I work on material culture, and I’m an Art/Architectural/Design Historian, my brain is always taking in everything that I see and assessing its relevance to what I’m interested in/what I’m working on. It’s not a 9-5 job, but a black-hole-like life-consuming job.

Cycling is my release from this world where my brain is otherwise constantly on and I’m working mentally, if not physically. But over the course of 2017 this release has taken on a very different form and appearance. This is based entirely upon a change of situation last year, the people that I met, and various things that happened. I moved to Manchester in September 2016 having spent 14 years in Scotland, mostly in St Andrews, though with six months in Inverness and a year in Stirling: this move south, and joining the Rapha CC have been the most formative and influential steers upon my cycling.

In December 2016 I undertook a power profile test, organised by the RCC coordinator, Joe Cox. In January 2017 I took the guy who performed the test and analysed the data on as my coach. 12,500km (hard training and racing) later this year, and I’m a different person. My cycling is almost entirely unrecognisable from even six months ago. It’s still a release from my life, but rather than taking in views and chatting to other cyclists on a club ride, I’m doing long and progressively harder intervals. No longer do I care about the roads that I ride to discover new places, which I would have done before, and ride new roads/lanes/hills, but I ride out to roads/lanes where I know I can achieve certain intervals at certain powers for certain durations. The discovery is no longer scenic, but physically internal; can I really keep 450w going for 5mins x4 in a 3h ride, or complete 3x 10mins at 400w? Where I ride is almost entirely irrelevant. Numbers are King. It’s a world of physical pain and endurance that I’ve never, ever, experienced in my life.

This may sound like I’ve lost the heart and soul from my bike riding, but the mental and physical impacts are incredible. There is no mental capacity to do anything other than pushing the pedals and burying myself yet further in pain. The net result is that I’m entering races…TTs, road races, and crits, and physically pushing myself. Every TT has scored a PB, I’ve won a road race (couldn’t believe it at the time), and also placed in the top 10 in the local, Tameside, Crit. My training and racing has given me something to strive for outside of work, and I’m reaping the rewards physically, mentally, and in terms of work/life balance. I’m now no longer just an academic, but a racing academic. And I don’t want this to change, because it gives me a balance in life. Even getting caught up in a crash during a road race this week in Nottinghamshire was a blessing in disguise. I didn’t finish, didn’t score any points (though I don’t need any more for the year) and didn’t come away unscathed, but it emphasised what the fine balance is between the fierce serenity of a peloton going along hard, and what can happen on the flip of a coin.

My commitment to training, racing, and continual improvement has made me a much better, more competent, and more competitive cyclist. I know my physical strengths and weaknesses now like I’ve never done before, and I know my body inside out…a wiredly aware connectivity. 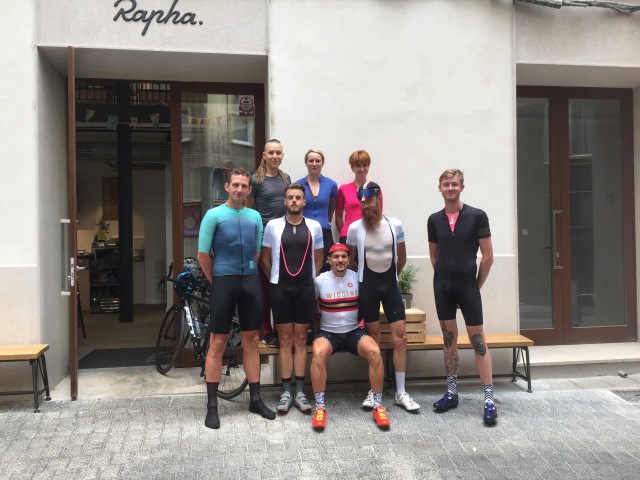 So how has this saved me? Nearly five years ago, I came back from working in Germany to find my marriage over, that I was also jobless, homeless, and directionless. I had no idea what to do and where to go. One year later, still without any firm direction, save returning to St Andrews to do some small amount of teaching at the University, I took up cycling again. It gave me a way to direct my anger and frustration. Skip forward four-and-a-half years and I’m a different person. The ex-wife’s actions caused years of destructive pain and suffering, but without this I wouldn’t be the scholar and cyclist I am today. I lack the physical talents of others, but this suffering has given me the capacity to ride hard, and enjoy riding hard.

I do ride lanes with grass up the middle, particularly around my parents’ home in N.Wales, but give me an airstrip, junction-less roads, or the A55 early Sunday morning for a TT, and you’ll see a painful grimace coming from the effort of pushing the pedals hard. In between intervals, I do appreciate clipping through ancient villages and passing interesting churches.